Showing posts from 2008
Show all

Frost at the Farm 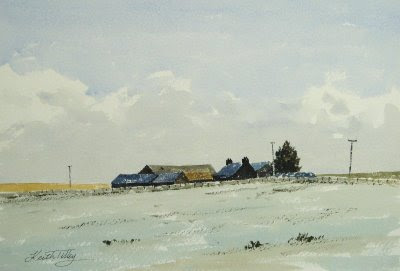 Frost at the Farm Watercolour, 10 x 14 inches, 25 x 35 cm Season's Greetings and Best Wishes to all for the New Year.
6 comments
Read more 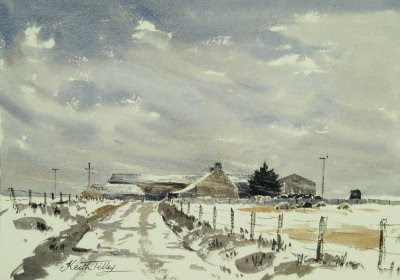 The cold weather seems to have come earlier this year. Already we have had more snow than in recent years, together with sub-zero temperatures during the day. Familiar scenes have been transformed and colours have become almost monochrome. I love to paint this farm. It is just down the road from where I live and often catches my eye as a subject. The buildings all combine nicely to make a unified area of strong tone. Also it stands on its own on a bit of a hill, so that it makes a nice shape against the sky. On this occasion I liked the way the old buildings seemed to stand strong and firm in the face of the elements, as they have for a hundred years or more. Wind and Snow Watercolour, 10 x 14 inches, 25 x 35 cm
3 comments
Read more 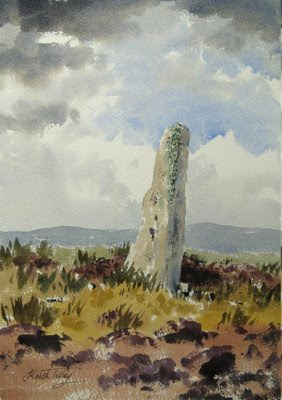 Timeless Watercolour, 14 x 10 inches I went for a walk last week in Dunbeath Strath. Through the trees, across the moor, and up onto the hill where an ancient stone stands looking out over endless tracts of wild country. It has been there for thousands of years and probably will be for many generations to come. As I sketched, surrounded by tombs and cairns, I was aware of a connection with the past, as well as a sense almost of timelessness. Hopefully, some of that feeling has found its way into the painting which I made later. Caithness abounds in ancient remains and it must have had a large population for those days. I read somewhere that the climate then was warmer and drier, so it would have been a pleasant place to live, with fertile soils and good fishing. The Vikings thought so too when they arrived in more recent times.
4 comments
Read more 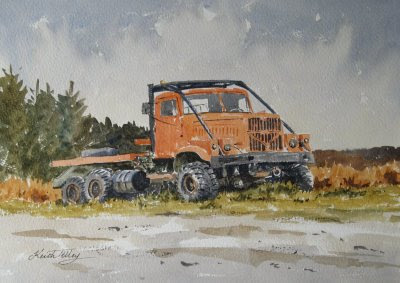 The Old Workhorse Watercolour, 10 x 14 inches This was an unusual subject for me, but it is good to try something different now and again. It was one of those dreary days when the clouds seem to come down to the ground, but as it wasn't actually raining I thought I might be able to get something done. There were no distant views and the poor light meant that the tones were all grey, so I needed to find some colour. I came across this old vehicle which was being used for forestry work, so I thought I would have a go at it. I hadn't been painting for very long when it started raining and there didn't seem to be any sign of it stopping soon. I have sometimes painted from inside my van in conditions like these, but I dislike doing it because it literally cramps my style, so this time I tried something else. I set up my tripod inside the vehicle and I stood outside, so I got wet but the painting didn't! I found that it worked very well and I think I might be able
3 comments
Read more I had quite a battle with this one - 50 mph winds and frequent blustery showers. I managed to find a bit of shelter under a low cliff, and worked on a small watercolour block on my knee. Even so, it was difficult to hold the brush steady against the wind. Onshore Wind, Crosskirk Bay Watercolour, 7 x 10 inches
Post a Comment
Read more