Showing posts from November, 2009
Show all

View from Strathmore Lodge Watercolour 9.5 x 20 inches (24 x 51 cm) I've been working on a few commissions recently. This one was a view of Strathmore from Strathmore Lodge. It caused me some problems because it was in a wide landscape format, whereas I usually paint what I can see more or less in my field of view. I knew how I wanted to compose it, but I had several attempts at it and each time I ran out of space on the paper. It didn't help that I needed to move the hills a bit to the right in order to get the river in front of them. The solution in the end was to treat the two halves of the view as separate sketches and then join them together. Then I was able to transfer the whole image to the watercolour paper.
9 comments
Read more 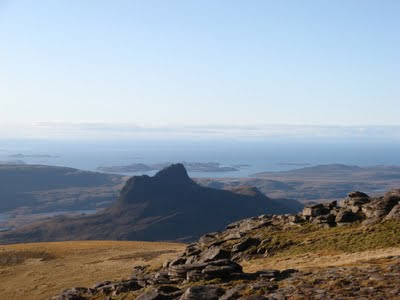 The Coigach area of Sutherland was looking spectacular last weekend. I took advantage of the good weather to do some hill-walking before the winter weather really sets in. My destination for the day was Cul Mor. It's not one of the highest hills in the area, nor is it as interesting as some, but it has good views over the surrounding mountains and out over The Minch to the Western Isles on the horizon. Views from the summit: - Stac Pollaidh Suilven Ben More Assynt On the way down I came across an area of glacial erratics - loose rocks left behind when the glaciers melted after the last Ice Age. As I looked at them a thought occurred to me. Most of them probably hadn't moved in all that time. The smaller ones might get nudged by passing deer and the snow and strong wind in winter might have some effect, but the larger ones were probably too heavy for that. I had an urge to turn one over and reveal a surface that might not have seen the sun for 10,000 years, but then
15 comments
Read more
More posts