October 27, 2009
The popular route up Ben Hope is from the parking area beside the Allt á Mhuiseil. This is the shortest way up but it is very steep and eroded. I set out to try the longer route which follows the Leitir Mhuiseil ridge. It starts from the ruined broch at Dùn Dornaigil and goes up next to the farm buildings. After a short distance I reached a farm track and this led uphill, until a path branched off to the left and continued to the ridge. A rougher walk follows the Allt na Caillich up, by a dramatic waterfall, to reach the same point. 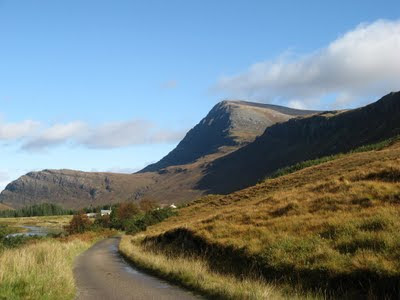 At the point where the route crosses the Allt na Caillich (The Stream of the Old Woman) I found a memorial to a young man who lost his life on the mountain. I don't know what the circumstances were, but it was a reminder of how mountains need to be treated with respect. At this point my eye was caught by the way that the blue water disappeared over the edge of the waterfall, contrasting with the brown hillside behind. I felt that it was something that I needed to paint, so out came my sketching equipment.

The crossing of the burn was easy enough and the route continued along the ridge, climbing steadily. The well-worn path followed the edge of the crags with airy views down into Strathmore. In bad weather it might be better to walk on the short heather further back from the edge. The dramatic cliffs called for a sketch in pencil. 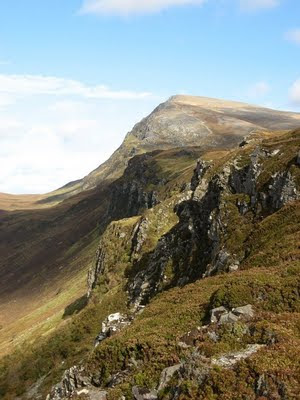 I followed the edge of the escarpment for two miles, until I reached the point where the main path joins it. The red deer rut was in full force, so all the way I was accompanied by the sound of stags roaring on all sides.

From here a steep climb up grass and scree eventually led to the summit. The views from the top were tremendous, taking in most of the mountains of northern Sutherland. To the north was the sea and the northern coast as far as Caithness. The Orkney Isles were on the distant horizon. 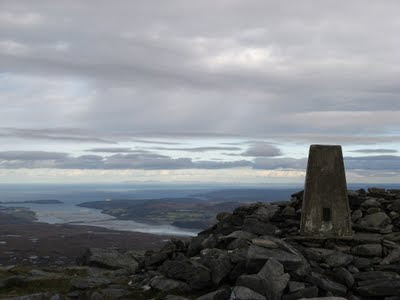 Looking out over the Kyle of Tongue to the Orkney Isles

The morning had been sunny and I had been very warm while climbing. However there were patches of ice on the summit and, when the sky clouded over, the temperature fell dramatically. I went over to have a quick look at the crags on the North Ridge, but it was getting too cold to stay any longer. The weather was heading downhill and so was I! 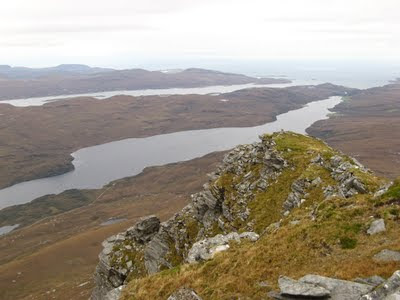 Looking down on the North Ridge

Going down the steep slope was more difficult than climbing up. The surface was very loose in places and it would have been all too easy to slip, with the added danger of the distracting views! 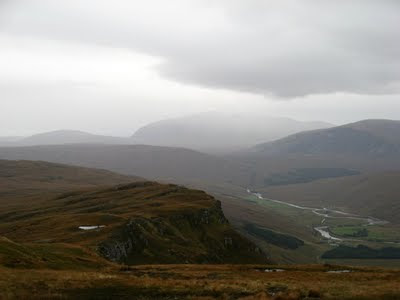 It was getting late by the time I was back down on the ridge, and it had started to rain, so I decided to continue on down the main path. It was very wet and slippery, with heavily eroded sections, confirming that the ridge route is much more pleasant. I found a couple of subjects to sketch on the way down. Watercolour was out of the question in the rain, so I used pencil and applied the colour when I got home. 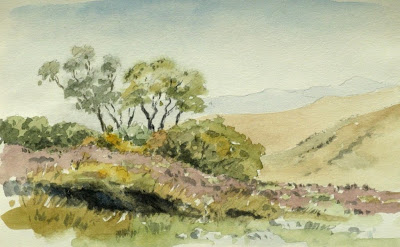 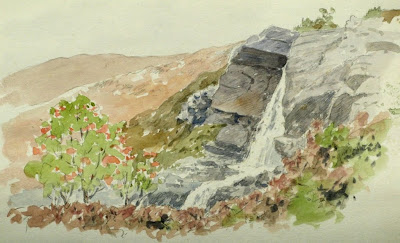 The final two miles along the road back to the starting point was a bit of a slog, but there was the compensation of the stags challenging each other on the slopes below the crags.

Kevin Menck said…
Keith, this stuff is awesome. The paintings, drawings, photos, all of it. What magnificent country. How in the world do you decide what to paint first?
Keep 'em coming.
October 28, 2009 at 12:24 AM

René PleinAir said…
Indeed what a trip, and what a views!

Anonymous said…
Amazing that you could sketch looking at that panorama around you, I know how difficult it is. Thank you for sharing this trip with us. Very interesting post.
October 28, 2009 at 1:43 PM

Keith Tilley said…
"How in the world do you decide what to paint first?"

I just take them as they come Kevin, and give thanks for the invention of the camera!

Keith Tilley said…
Yes Stuart, it's said that, if you don't like the weather, just wait five minutes and something different will come along!
October 29, 2009 at 9:39 AM

Bruce Sherman said…
Hi Keith!....What a well documented adventure! The views were breath-taking...and by the look of things...lifetaking ...if one failed to pay attention!

I loved the final 2 sketches worked up with colour at home. They are very sensitively handled...and are fine watercolours by any standard! Enjoyed this post! Thanks for your compliments and for visiting my blog!

John (JWJarts) said…
Awesome!! Thoroughly enjoyed sharing your adventure. All your paintings/sketches are great but agree with Bruce about the last two. Great post!
November 2, 2009 at 7:57 AM

Keith Tilley said…
Thanks Bruce and John. People seem to enjoy reading these accounts of my adventures in the hills, so I think I'll try to make them a regular feature.
November 3, 2009 at 8:44 PM

René PleinAir said…
"so I think I'll try to make them a regular feature."

Diane said…
What a wonderful combination of text, photos, paintings and drawings. I really felt as though I had experienced the walk with you, Keith.
November 6, 2009 at 10:10 PM

October 10, 2019
The sea between the island of Stroma and the Mainland has very strong tidal currents, where the waters of the Atlantic Ocean and the North Sea meet. This has made it an ideal site for the first commercial tidal power generation project in Scotland, and currently the largest in the World. The turbines are in the form of large propellers, similar to wind turbines. It's good to see a World-leading project based here in Scotland, and the Country is well on the way to having most of its energy from renewable sources.

I am concerned about the effect on marine life, particularly the whales and dolphins which are often seen in these waters, but I hope the environmental impact is being monitored and taken into account.

The ship in the painting was in the process of servicing one of the turbines.

May 11, 2016
"Moine House, Tongue" Watercolour on Fabriano Artistico 300gsm Rough paper 25 x 36 cm
West of Tongue, in Sutherland, there is a large peat bog called The Moine, which stretches all the way over to the next valley. At more-or-less the highest point there is a ruined building, called Moine House, which I have always found very striking. It is a wild and lonely spot and it has a background of dramatic mountains. I assumed that it was an old drovers' inn, but a plaque* on the wall tells the story of how it was erected as a refuge for travellers.

July 06, 2017
In 2015 the North Highland Initiative started a project to boost tourism in the northern counties of Scotland. The idea was to publicise a 500 mile route through Inverness-shire, Ross & Cromarty, Sutherland and my home county of Caithness, and promote it as a superb road trip. I don't know how successful they expected it to be, but it has quickly become very popular and has been called one of the top five coastal routes in the World. In fact its popularity is becoming a problem for the local residents: some of the roads are single-track, with bays at intervals to allow two vehicles to pass each other, but there is an etiquette for their use that strangers are not always aware of. The result is that local people going about their business find themselves held up by slow-moving tourist vehicles, so if you use the route please pull over and allow other vehicles to pass. The amount of traffic will probably also cause damage to the roads, which were not intended for heavy use. Desp…
4 comments
Read more